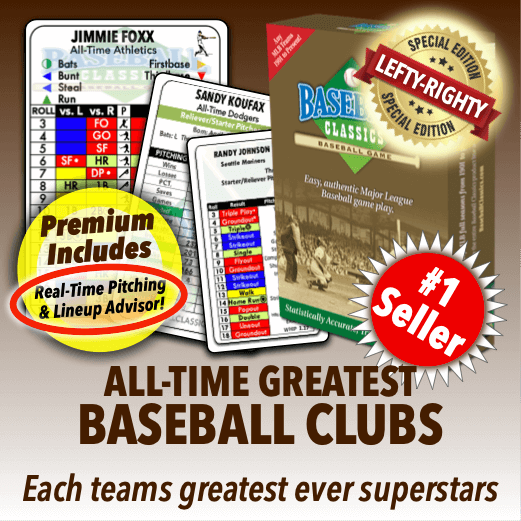 There are no reviews yet.

Only logged in customers who have purchased this product may leave a review.

Our Commitment With Every Order


Shipped anywhere in the world


Customer service is our priority

Baseball Classics thoroughly analyzed and hand-selected every Hall of Fame and All-Star players from each historic MLB franchise dating back to 1901 through today’s modern teams.

Has everything you need to play with 3 playing levels: beginner, intermediate, to expert for MLB fans ages 8 to adult.  Enjoy playing Baseball Classics All-Time Franchise Greats next generation MLB board game!

Baseball Classics provides Free shipping via USPS (United States Postal Service) for all orders sent within the 48 continental United States.  Most orders are processed for shipping within 1-2 business days.

We ship anywhere in the world.  Depending upon your location outside of the continental United States, shipping and handling fees will apply.

We offer a 100% satisfaction guarantee!  MLB fans loves Baseball Classics, though if for any reason you wish to return your product, we will accept it within 30 days from purchase.  Simply notify us via email at: sales@BaseballClassics.com to let us know so we can provide your shipping return code.  No questions asked, though feedback is always welcome.

“Simply put, the best game going and I have played all!!”
— Douglas Love

“Have been playing board baseball games since 1963.  Your game is not only fun, it is accurate, quick, and outstanding in it’s appearance. The fact that I can get any team or league since 1901 is amazing.”

“I have been a Strat O Matic player for 25 years but after ordering your 1980 set…just could not put it down!!”
— Christopher Decker

“I think this game is terrific. I believe it is the best table-top baseball game on the market. It’s ease of play combined with the easy to read card lay-out makes it a winner! I have played All-Star Baseball, Strat, Program IV Baseball, The Baseball Card Game…”
— Ken Sell